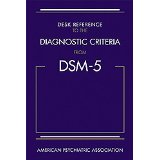 The DSM-5, Diagnostic and Statistical Manual of Mental Disorders, emerged last June after over 10 years of concerted effort on the part of hundreds of mental health clinicians in every field.  This Herculean effort was sponsored by the APA and WHO and included a 28-member task force, a work group of 130 members and a 400- member advisory group.  Mental health practitioners are just beginning to use it with some reservations, because this 947-page tome has renamed some categories of mental disorders, combined others, eliminated quite a few, and created new ones.  Many clinicians feel that this further complicates the use of an already extremely confusing resource while others hail it as the new Bible of Mental Health.

Regardless of which side of the fence one chooses, the DSM-5 will continue in use for “at least another decade” according to a New York Times article that followed its release, republished here:

Psychiatry’s Guide Is Out of Touch With Science, Experts Say
By Pam Belluck and Benedict Carey
Reprinted from The New York Times, May 6, 2013
Just weeks before the long-awaited publication of a new edition of the so-called bible of mental disorders, the federal government’s most prominent psychiatric expert has said the book suffers from a scientific “lack of validity.”

The expert, Dr. Thomas R. Insel, director of the National Institute of Mental Health, said in an interview Monday that his goal was to reshape the direction of psychiatric research to focus on biology, genetics and neuroscience so that scientists can define disorders by their causes, rather than their symptoms.

While the Diagnostic and Statistical Manual of Mental Disorders, or D.S.M., is the best tool now available for clinicians treating patients and should not be tossed out, he said, it does not reflect the complexity of many disorders, and its way of categorizing mental illnesses should not guide research.

“As long as the research community takes the D.S.M. to be a bible, we’ll never make progress,” Dr. Insel said, adding, “People think that everything has to match D.S.M. criteria, but you know what? Biology never read that book.”

The revision, known as the D.S.M.-5, is the first major reissue since 1994. It has stirred unprecedented questioning from the public, patient groups and, most fundamentally, senior figures in psychiatry who have challenged not only decisions about specific diagnoses but the scientific basis of the entire enterprise. Basic research into the biology of mental disorders and treatment has stalled, they say, confounded by the labyrinth of the brain.

Decades of spending on neuroscience have taught scientists mostly what they do not know, undermining some of their most elemental assumptions. Genetic glitches that appear to increase the risk of schizophrenia in one person may predispose others to autism-like symptoms, or bipolar disorder. The mechanisms of the field’s most commonly used drugs — antidepressants like Prozac, and antipsychosis medications like Zyprexa — have revealed nothing about the causes of those disorders. And major drugmakers have scaled back psychiatric drug development, having virtually no new biological “targets” to shoot for.

Dr. Insel is one of a growing number of scientists who think that the field needs an entirely new paradigm for understanding mental disorders, though neither he nor anyone else knows exactly what it will look like.

Even the chairman of the task force making revisions to the D.S.M., Dr. David J. Kupfer, a professor of psychiatry at the University of Pittsburgh, said the new manual was faced with doing the best it could with the scientific evidence available.

“The problem that we’ve had in dealing with the data that we’ve had over the five to 10 years since we began the revision process of D.S.M.-5 is a failure of our neuroscience and biology to give us the level of diagnostic criteria, a level of sensitivity and specificity that we would be able to introduce into the diagnostic manual,” Dr. Kupfer said.

The creators of the D.S.M. in the 1960s and ’70s “were real heroes at the time,” said Dr. Steven E. Hyman, a psychiatrist and neuroscientist at the Broad Institute and a former director at the National Institute of Mental Health. “They chose a model in which all psychiatric illnesses were represented as categories discontinuous with ‘normal.’ But this is totally wrong in a way they couldn’t have imagined. So in fact what they produced was an absolute scientific nightmare. Many people who get one diagnosis get five diagnoses, but they don’t have five diseases — they have one underlying condition.”

Dr. Hyman, Dr. Insel and other experts said they hoped that the science of psychiatry would follow the direction of cancer research, which is moving from classifying tumors by where they occur in the body to characterizing them by their genetic and molecular signatures.

About two years ago, to spur a move in that direction, Dr. Insel started a federal project called Research Domain Criteria, or RDoC, which he highlighted in a blog post last week. Dr. Insel said in the blog that the National Institute of Mental Health would be “reorienting its research away from D.S.M. categories” because “patients with mental disorders deserve better.” His commentary has created ripples throughout the mental health community.

Dr. Insel said in the interview that his motivation was not to disparage the D.S.M. as a clinical tool, but to encourage researchers and especially outside reviewers who screen proposals for financing from his agency to disregard its categories and investigate the biological underpinnings of disorders instead. He said he had heard from scientists whose proposals to study processes common to depression, schizophrenia and psychosis were rejected by grant reviewers because they cut across D.S.M. disease categories.

“They didn’t get it,” Dr. Insel said of the reviewers. “What we’re trying to do with RDoC is say actually this is a fresh way to think about it.” He added that he hoped researchers would also participate in projects funded through the Obama administration’s new brain initiative.

Dr. Michael First, a psychiatry professor at Columbia who edited the last edition of the manual, said, “RDoC is clearly the way of the future,” although it would take years to get results that could apply to patients. In the meantime, he said, “RDoC can’t do what the D.S.M. does. The D.S.M. is what clinicians use. Patients will always come into offices with symptoms.”

For at least a decade, Dr. First and others said, patients will continue to be diagnosed with D.S.M. categories as a guide, and insurance companies will reimburse with such diagnoses in mind.

Dr. Jeffrey Lieberman, the chairman of the psychiatry department at Columbia and president-elect of the American Psychiatric Association, which publishes the D.S.M., said that the new edition’s refinements were “based on research in the last 20 years that will improve the utility of this guide for practitioners, and improve, however incrementally, the care patients receive.”

He added: “The last thing we want to do is be defensive or apologetic about the state of our field. But at the same time, we’re not satisfied with it either. There’s nothing we’d like better than to have more scientific progress.”

A version of this article appeared in print on May 7, 2013, on page A13 of the New York edition with the headline: Psychiatry’s New Guide Falls Short, Experts Say.