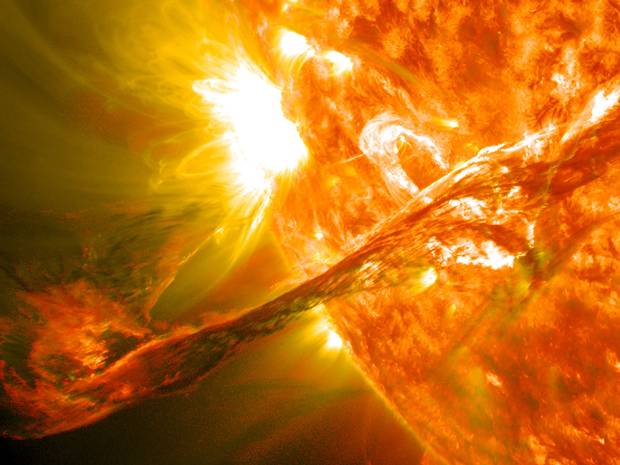 NASA offers a plausible explanation for the challenges many of us have been experiencing over the past few months in a recent article published by The Mind Unleashed:  http://themindunleashed.org/2013/12/suns-field-will-flip-upside-within-weeks-says-nasa.html

It appears that intense solar activity, such as the reversal of the sun’s polarity (which happens every 11 years), does affect our geomagnetic field, resulting in increased agitation and activity.  If we review global events over the past 12 years, we can track the truth of this theory– beginning with what happened during the fall of 2001 (the 9-ll phenomena) right up to the recent political and financial upheavals experienced here in North America and around the world.  Many of us are experiencing personal “geomagnetic storms” as well.

In my last blog, “Kick-Ass Angels,” I mentioned the need for care of self, care of others, and the importance of grounding our connection to our spiritual source during these challenging times.  We may not always be able to see the reason for a particular setback, but it can help to know that such setbacks are more or less universal and  may be inspired not by a vindictive deity seeking to punish us for past “misdeeds” but by a shift in the energy of a benevolent universe seeking to raise us to a compatible level of consciousness.

While the mechanism behind the stimulation of human behavior is still a mystery, many are now accepting that humanity is receiving the highest support from the consciousness of the cosmos, allowing us to wake up to our magnificence and divine connection to each other and the universe. The Sun is only assisting in this inevitable process.

It will be traumatic for many when those revelations of why human consciousness if shifting at the same time major changes are being introduced. Knowing that all of the confusion and turmoil is heralding Earth’s exit from third density, how will we be prepared to weather the coming months and to help those who are foundering. The interesting fact about this energy is that since it is of a higher frequency it creates the power of instant manifestation of our thoughts, which means whatever we think, we create instantly. This never before happened in our lifetime and that is why many people are writing books on the subject on the Power of Attraction. Photonic energy connects to our thoughts so it is important that we know what we want, rather than we don’t want, otherwise, we will manifest more of what we don’t want. If you are in the process of change and transformation this energy works well for you. On the other hand, if you are stuck in the past through victimization and anger, you will simply manifest more reasons to remain stuck in victimization until you are ready to release it.There is some Russian research that shows an increase in cardiac problems during sunspot maxima. The solar activity probably sets off a preexisting condition and no one is suggesting that people will drop dead in the streets. We could see the stress of solar activity on the biology of living things as an evolutionary agent weeding out the old and sick and strengthening those who can resonate with its radiations.There will also be an increased frequency of deaths worldwide following the solar maxima. These may take place through accidents, illness and other factors which will be attributed to chance, however most of these deaths will be related to an acceleration of consciousness and self-imposed termination for those not willing or ready to experience a fourth dimensional experience. Professor d’Arsonval gives several examples of research done in the last hundred years that shows the most malefic effects from solar activity come at the sunspot minima. He notes from the British Medical Journal, March 7th & 14th of 1936 that both Colonel C.A. Gill and Dr. Conyers Morrel found increases in pandemics of deadly diseases during the period of minimal sunspot activity.In Gill’s study he showed that every pandemic of malaria since sunspot records were taken had occurred when sunspot numbers were lowest. Similar trends were observed in East Africa and elsewhere with Yellow fever epidemics since 1800 occur during the sunspot minima. Dr. Conyers Morrel also finds that, “…waves of epidemic diseases covering considerable periods exhibit a very close correspondence with the phases of sunspot periods. Diphtheria, Typhus, and Dysentery seemed to prosper when there was an absence of solar activity. We also see an increase in disease in Solco W. Tromp’s study. Without the stimulation from the Sun human health seems to diminish. The immune system seems to grow unresponsive during the solar lull and diseases can more easily gain a foothold in the body.Not only human health but Life itself seems hampered by the lack of solar activity. William Hershel wrote in 1801, “It seems probable analyzing the period between 1650 and 1713, and judging by the normal yields of wheat, that a scarcity of vegetation occurred whenever the sun appeared to be free from spots.” The depressed state of metabolism and lack of food in agricultural centers may have seemed very inviting to the Mongols. Goncharov, in an abstract on the “Asian Nomadic Invasions and Solar Cycles”, aid, “From the 4th to the 16th centuries the Central Asian Steepe was the cradle of the series of great nomadic tribal invasions into agricultural regions of Europe, China, and South Asia. Those invasions had similar features. They arose in middle latitudes and recurred every 160-220 years — exactly after solar abatements.”What we will be experiencing in 2013 and 2014 more than anything else is a constant upgrade to our current belief systems, collective consciousness and awareness of earth’s true history from the constant bombardment of solar activity.There will be no more major wars but a shift with no central ideology. This ideology will grow and spread worldwide with no exception. The shared understanding is arising from different economic sectors, cultures and regions. Our economic landscape will change, and although a planned one-world currency will be enacted, we will quickly dismiss this new system within a short period of time and move toward non-monetary systems.All these information packets from the Sun will make us feel like we need to find a new center of truth. As galactic connections have increased around the 2012 summer solstice and then again for the universal collective around the 2012 winter solstice, we must all listen intently to our intuition and trust it. Each solstice in 2013 and 2014 will represent new elevated levels if awareness. If it doesn’t feel right, switch over to something that does. It’s that simple.